What is domestic violence?

What is domestic violence?

What is domestic and family violence?

Domestic violence is a pattern of behavior, and it involves one person in a relationship trying to control the other person. It’s not usually a single act, but lots of different acts or actions that end up damaging the person who experiences it physically, socially, and mentally.

Abuse can be physical, leading to injuries and even death

The abuser might try to hide the signs of their violent behavior towards you by hitting you in areas that are hidden by clothing, or they may not care. Physical abuse can have lots of other negative effects on you, apart from physical pain. It may mean that you stay at home because other people will notice what’s going on. It will affect your self-esteem if the injuries are visible. And it will have an impact on your children if they witness it. Actual violence might happen all the time, or only occasionally – in which case, the threat of physical violence can be almost as harmful, affecting the way you feel and behave.

Abuse can be emotional or psychological, affecting the way you feel about yourself

Emotional abuse has severe effects on your confidence. Constant putdowns and insults make you feel worthless and hopeless and no good for anything. After a while, we don’t even need to have them near us to ‘hear’ their voice in our head, putting us down. But you have to remember that this is how the abuser wants you to feel. They are really very good at making us feel like it is somehow our own fault. If only “I had got the dinner on earlier” then it wouldn’t have happened. If you feel this way, you might feel like you don’t deserve anything better, that no-one else will ever love you if you leave your abuser. Why would the person who is supposed to love you the most treat you like that? We can feel like we are going crazy, because how else do we make sense of the situation? It can be very difficult to explain what is happening, and we think that other people might not believe us because there are no physical signs.

Abuse can be financial, leaving you with little or no money

Financial abuse means not just that you are financially dependent on your partner, but also is a denial of your rights as an individual and as a parent. Couples have lots of different financial arrangements, especially when they have children, but if your partner controls the finances to the extent that you and/or your children suffer from a lack of daily necessities, then that is a form of abuse, aimed at telling you who is in control, and limiting your options to leave the relationship. Also, if your partner denies you the right to work or to study, then this can affect you for your whole life, stopping you from getting qualifications or experience so that you can support yourself and your children without having to depend on your abuser for financial support.

Abuse can be social, leaving you without friends and with no contact with your family

Social abuse is about isolating you, taking away your support network of family and friends or other important social networks. At first, you might feel special that your partner wants to spend so much time with you or doesn’t want you to have contact with others, but then you might begin to feel like it’s restricting your freedom and makes you feel uncomfortable. Having close relationships with other people is normal, and we all need to feel connected to feel good about ourselves. And if you are part of a small ethnic or same-sex community, then those bonds can be very important to your sense of identity and well being.

Abuse can be sexual, leaving you feeling shame and humiliation

Sexual abuse is a very common form of abuse in relationships affected by domestic violence – far more than perhaps we realize, because generally we don’t want to talk about it. It can damage you psychologically and physically and make it harder for you to have a healthy sexual relationship with someone else after your relationship with the abuser has finished.

Many people who experience domestic violence ask themselves, why me? Why is this happening to me? Did I do something wrong? They ask themselves over and over again, is there anything I could do differently to make the abuse stop? They stay in relationships because they think that they are somehow at fault, it’s something about them, their personality, their character, which makes the abuse happen. And that’s what their abuser wants them to think.

But domestic violence happens to people from all walks of life. It doesn’t matter what age, class, cultural background or religious/spiritual beliefs you have, domestic violence can happen to anyone. It is not because of you or something you have done or not done. You are not responsible for the behaviour of the perpetrator. And you do not have to tolerate this behaviour.

Congratulations on taking the first step towards saying ‘NO’ to this behaviour. It is a difficult step and shows great strength. 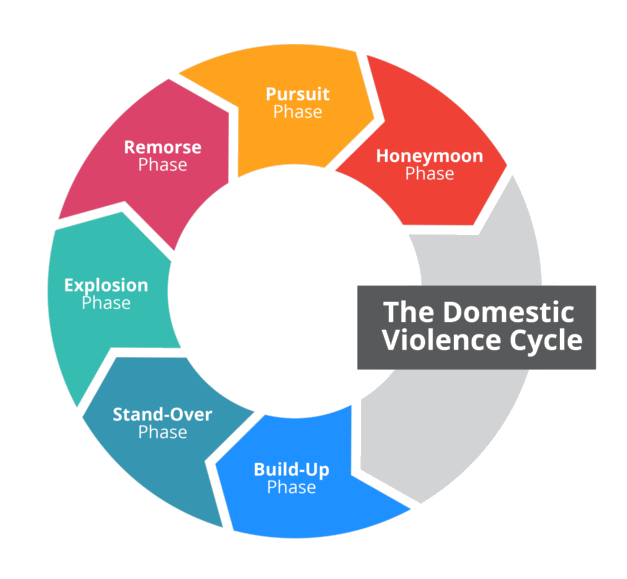 The domestic violence cycle is a way of describing what commonly happens in relationships characterised by abuse. Abuse is generally not constant: it varies according to a distinct pattern of ebbs and flows. This can be very confusing for the person suffering the abuse, and can lead to other people outside the relationship underestimating the extent of abuse. If others tend to see your partner in the ‘remorse’, or ‘pursuit’ or ‘honeymoon’ phase, they may think that there is no problem, that you’re exaggerating or making it up. You yourself might be fooled time and again, believing what your partner says that this time, he or she is going to change, they’ll make it up to you, they love you, it won’t happen again. Until the next time tension escalates and the violence erupts again. You need to recognize this pattern for your own safety, taking measures to protect yourself from the ‘explosion’ phase.

Build up phase: during this period, tension starts to increase. There may be lots of small episodes of emotional, sexual, financial and other types of abuse.

Stand-over phase: this period is marked by increasing control on the part of your partner, with abuse escalating so that you are fearful for your safety. The abuser becomes increasingly unpredictable, and you feel that anything you do or say might set him or her off.

Explosion: As the label suggests, violence erupts, taking extreme forms, often physical or sexual. This is the most dangerous period of the cycle.

Remorse: after the explosion, the abuser will feel or at the very least, express shame and guilt at their behaviour. They will also downplay their actions to you and to themselves, minimizing the episode.

Pursuit: During this phase, the abuser might make all sorts of promises, in particular, that it will never happen again. They may also try and excuse what happened, trying to explain it away as a result of some other factor or stress. The abuser will make efforts to win you back: buy you presents, take you out, be nice to you and your kids or family.

Honeymoon: the attentiveness of the abuser continues, and there is often an increased intimacy. You may be hopeful that the relationship is on the way up, that there will be no more violence, but unfortunately, you and your partner are probably deluding yourselves. This phase will end, to be replaced again by an increase in tension, and so the cycle continues.

SUPPORT AND SAFETY IS POSSIBLE

Someone you know needs help?